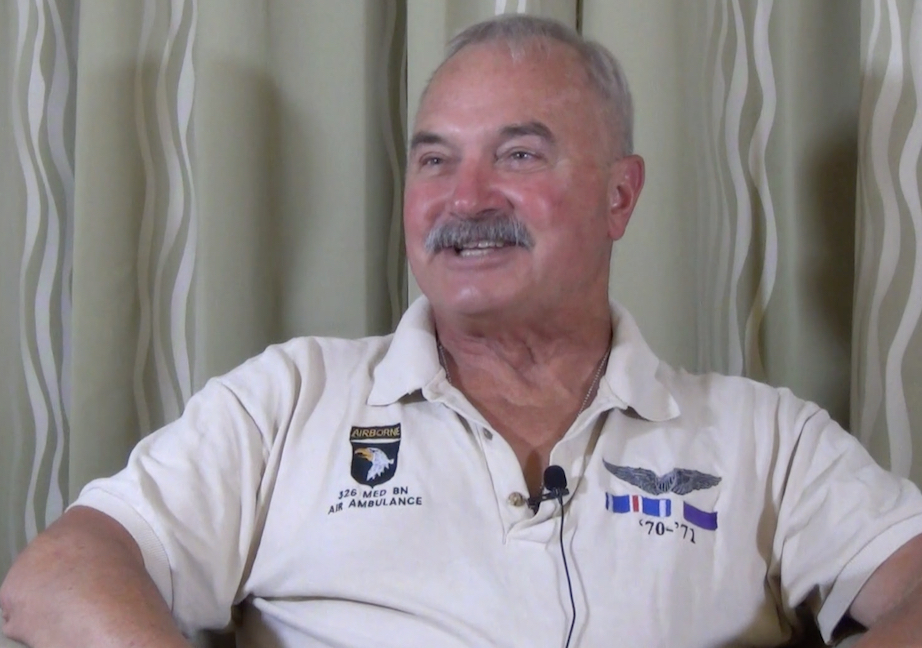 Fred Behrens
Fred Behrens grew up in a military family. His father, who had been horse cavalry before shifting to field artillery prior to WWII, eventually transitioned to the Air Force in 1947. Fred grew up with a love of aircraft, and knew he wanted to fly. In 1969, he enlisted to become a Warrant Officer helicopter pilot. After basic training at Fort Polk, Louisiana, and flight school at Camp Wolters and Fort Rucker, he deployed to Vietnam. He was assigned first to the “Kingsmen,” B Company, 101st Assault Battalion, where he flew a UH-1 Huey carrying troops on combat missions. He was then assigned to HHC, 2nd Brigade, 101st Airborne Division, where he flew an OH-6 on a hunter / killer scout team. Finally, he volunteered to fly as a “dustoff” pilot in the Air Ambulance Platoon of the 326th Medical Battalion. In April, 1971, he was shot down while picking up wounded Rangers on Hill 809. During a three-day ordeal, he was wounded multiple times by North Vietnamese Soldiers, and suffered further injuries when he was hit by danger-close friendly fire. In this interview, he talks about his childhood, his decision to become a pilot, and his service in Vietnam. He discusses the various types of missions he flew in Vietnam with three different units. He describes, in detail, being shot down, struggling to survive, and recovering from his extensive wounds. Finally, he talks about working for wounded veterans and surviving family members, and explains what his service means to him.

Leonard Edwards
“I Knew It Was Going To Be A Bad Year”: An OCS Officer With D/1-5 Cavalry In Vietnam

Phil Mallory
Cultivating A Warrior Spirit At West Point: From Dak To To The Physics Department

John Laurito
“I Never Wanted To Cheat To Win”: Pressure, Honor, And Redemption

Douglas Feith
In the Whirlwind of a New Age: A Defense Undersecretary's Quick Education, Part 4: Critical Reflections on the Iraq War

René MaCaré
“We Were There To Do The Right Job”: A Sniper With The 173rd In Vietnam