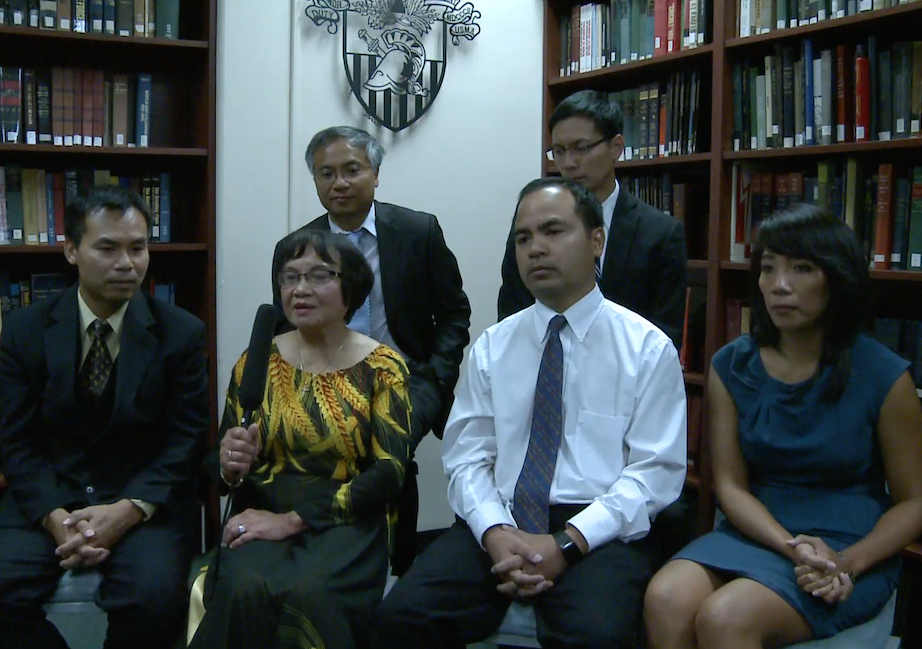 Nguyen Family
Hieu Thi Ngoc Phung was born in Hanoi in northern Vietnam in 1942. Her brother fought for the French and served at Dien Bien Phu. In 1954, when the country was partitioned, her family moved south, eventually becoming established in several villages. She pursued her education and became a teacher. She was teaching in Da Lat when she met her future husband, Thong Huu Nguyen, a Cadet in the 16th class of the Vietnamese Military Academy. Upon graduation, he pursued a career in the Army of the Republic of Vietnam (ARVN), and in 1967, he married Phung. In March, 1973 Thong Huu Nguyen was promoted to Colonel of the 42nd Regiment, 22nd Infantry Division, stationed in Tan Canh, Kontum. On April 2, 1975, Colonel Nguyen was listed as missing in action in Quy Nhon, Binh Dinh Province, leaving Phung, nine-months pregnant, a single parent with three sons, a daughter. After the fall of Saigon and the end of the war, the family suffered greatly. Phung tried to return to her job as a teacher, but was quickly blacklisted, and had to resort to selling bicycle parts to support her family. Little by little, she was able to save money in the form of gold, which she kept hidden, constantly planning to get her children out of the country. As the children grew, the possibility of escape increased, and eventually she was able to send her family in pairs to the Philippines as refugees. Years later, her family was able to reunite in the United States, where they have all been able to achieve a level of success unavailable to them in post-war Vietnam. In this interview, Phung narrates the story of her family, starting with her childhood in the north, moving to South Vietnam, becoming a teacher, meeting her husband, and their life together. As she tells the story of living through the war years, her children provide their own memories of the war and their father. During her discussion of the post-war years, the children add their perspectives on their education under a communist system, relations with their friends, and helping their mother care for the family. As the interview progresses to the stories of escape and refugee life in the Philippines and in America, the children take the lead, detailing their own experiences, and the hardships they endured. Finally, they all recall their family’s reunion and working to achieve the American Dream.

Viet Thanh Nguyen
“Born In Vietnam But Made In America”: The Story Of A Pulitzer Prize Winning Vietnamese Refugee

Paul Giannone
“I Didn’t Want To Kill Anybody – Blood Gets On Your Soul”: A Public Health Advisor In Vietnam

Uc V. Nguyen
Flying A Huey In The Vietnamese Air Force: A Battalion Commander In The 64th Helicopter Tactical Wing

Nam Pham
Fleeing Vietnam With The Boat People: The Story Of The Captain Of A Refugee Vessel

Ylli Daladaku
“It’s Good”: The Bright Side Of West Point For A Cadet From Kosovo

Tran Minh Cong
The War Had Many Different Faces: Service As A National Police Colonel In The Republic of Vietnam

Hugh Nguyen
Finding His American Father: An Amerasian’s Search For Understanding And Acceptance